It is said that thousands of Wiccans (“witches”) will, tomorrow, 25 October 2019 cast a “binding” spell on Donald Trump, preventing him from “harming” the earth and its inhabitants.

This magickal act is not intended to “curse” the President (which, under the Wiccan Moral Code would reflect seven times the negativity back onto those who cast the spell; just as blessings rebound to the benefit of those who intend good).

Nonetheless, any negative energy surrounding the proposed “binding” must be countered to maintain balance, especially in the current time when extreme political views are clouding people’s consciences, giving rise to hatred and negativity.

Let it be noted that I did not vote for President Trump (the last time I voted for one of the “two” ruling party candidates for President was in ’68, the first year I could vote in a presidential election, and I voted for the “peace” candidate, the Man with the (Secret) Plan to End the War in Vietnam).  I’ve always voted Libertarian since and do not intend to change that in 2020.

However, I can see the benefit of having a non-politician disrupter in the White House.

Dangerous and tyrannical trends are being reversed; the all-too-cozy relationship between the Deep State and the Media is being exposed. The crony corporations are reassessing their priorities.  American troops, thank the Gods, are being brought out of harm’s way.  The current White House occupant may very well be the first Peace President since Eisenhower.

Therefore it is incumbent upon White Lighters to consider bringing the Light of Truth to the undertaking.  I therefore offer this Bind Rune to reflect any negativity in the working, protecting President Trump from all harm. 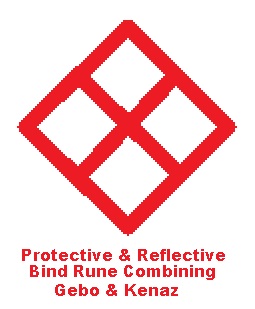 The Bind Rune is a combination of two Kenas runes and one Gebo rune.  Kenaz is the Light of Illumination and Gebo is the Gift of Joining.

When Brunhilda taught Siegfried rune magic she taught him certain runic spells.  Two of those spells are intended to reflect negative energy.  There is reason to believe that these two spells were associated with the K and G runes.  Thus, this Bind Rune is intended to harness the energy of the Folk to protect our current presiding Father of the Country.

Let us all pray, in whatever manner we choose, for peace and prosperity.  These are the gifts of enlightenment and cooperation, the runes we have bound together to reflect any negativity as the wise ones work their magick.

Like the Good Witches in the story of Sleeping Beauty we may not stop the casting of the binding spell but may deflect any negative intentions and rather, bind the President to his Oath to protect and defend the Constitution.

Thus the power of the binding is joined to the President’s own Oath, for the benefit of our Liberty.

Respectfully submitted to the Wise,