A Rune Poem for the New Age

In These Jersey Woods

The Hidden Stream - An Epic of the New Millennium

A Requiem for the Boomers

Book of Illuminations
Book of Passages

SOMETHING NEW ON THE INTERNET, HYPERTEXT HAIKUä BY REV. ESNUR!

A Requiem for the Boomers
“Life is change; that’s how it differs from the rocks.” – Jefferson Starship
“Make America Great Again.” – The Final Boomer President 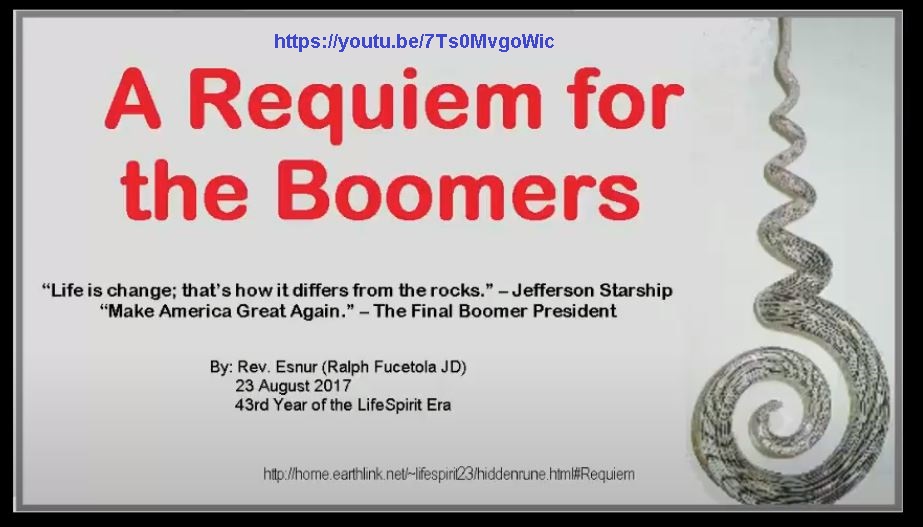 Born in Jersey while

And the whole world changed.

Earliest memory -- the aunts, kitchen, decrying
Yet another war, in far-off north Asia.

And the day our first TV arrived.

Howdy Doody, the draft’ll get you,

Over the party-line phone.

At least we didn’t blow up the world.

Or not much of it.

And the world changed again.

And the world changed in unknowable ways.

Bits an’ pieces... Raising the Pentagon in ‘67
Getting booted out of YAF in ‘69
Occupying Old Queens in ‘70


The great Mises in ’71 telling us

Long-haired libertarian hippies,
“You are eating your seed corn.”

And the world continued to change.

Boston Tea Party bicentennial ’73,
LifeSpirit close encounters and all that...

Bumping into Karl Hess on the streets of DC,
Howard Jarvis and the Tax Freedom Movement,
May Day ‘76 – exorcising the demons at the UN HQ
On the Bicentennial of the founding of the Illuminati.
Prof. Rothbard, Tim Leary and R A Wilson...

During the ‘80s and 90s the Boomers focused
On making money... the Internet arrived;
Fought in the Vitamin Wars...
The Wall came down to rock’n’roll sound,

And the world changed enormously.

Bringing son and friends to the ’07 Peace March --
Forty years since the Raising of the Pentagon.

DC knows how to embrace protest and blunt it.


“Informed Consent is the defining issue
Of the 21st Century.” General Bert

Ron Paul, the LP and the Tea Party.
Nobel president escalating drone strikes.
The logic of empire knows no logic,

And the world keeps on changing.

But, at least we didn’t blow up the world.

For a half century and more
Boomers sang and smoked and drank
And loved ... and ate our seed corn.

Leaving the mess to our
Children and grandchildren,
Not at all prepared for it.


We didn’t blow up the world.

At least not much of it.

And it All ceaselessly changes.
Life, and rocks, All the great Earth.

In These Jersey Woods

On this land we called our own,

Conquered by your forbearers;

On this land untouched by war

Two centuries and more, since

On this land we rolled boulders;

Making sigils for all to see,

'Round a sacred double Vee.

On this land we call our own

We chanted those hidden Runes;

We made this land our own.

On this land I'll die,

These Runes we wrote.

On this land no tyranny;

On this land in freedom,

On this land I call our own.

RomeAmerica
A message to my son about the Old Republic
For D.A.G.F.

I want to tell you, son,
About some of what we lost
In the headlong rush
Toward that imperial vision
That toppled the Old Republic.

How do you protect your own?
And what runes were cast
When he crossed that Rubicon?

Millions in chains… torture
Displayed for all to see.
Grandeur and greatness…
Most powerful army ever.
None can stand before
The might of RomeAmerica.

All the world worships us,
And despairing, must rebel.

The ancient writs no longer apply.
Authority multiples daily.
What’s the market for liberty
When security’s the only coin?

The great believe they have no choice
But to vie for greater power.
The ancient virtues
Of the founding fathers…
The best and noblest lost,
While all the rest prefer not to know.

“We hold these truths self-evident…”

Forgive these mutterings
Of a former Son of Liberty.
The Old Republic never died,
So long as it lives in you.

[The Father in this piece could be imagined to be a somewhat distant relation of the Julii family, in Rome, just about the time cousin Cesare became dictator, late 1st Century BCE.  The persona longs for the return of the Old Republic.  This story may echo the America of your Greene/Lee/Custis ancestors at the time of the Whisky Tax Rebellion in the late 18th Century... and maybe an imperial America in the early 21st Century... ]

NOTICE: The Herein Private, Privileged and Confidential Message or Other on behalf of LCC' and or Communicants' is to be considered printed in the color of red ink, equals, = private..., and is for discussion only; and is lawfully privileged..; NOT INTENDED FOR USE BY PUBLIC FICTIONS THAT RECEIVE IT. LCC\Universally. . . States that all Forces.. Dimensionally.. and Otherwise.... Provide LCC and Its Communicants... Who so Choose... Wellness... Peace.., Happiness.., Protection.., Prosperity.., Wealth.. Now and Forever...:: Three Clap Technique ... Hidden Rune . . .